The Famous People I met at the Steel City Con...

Some of the famous people I got to meet and talk too.
Mickey Dolenz was as cool as he appears. We met him at the hotel and he talked to me and Lee for 45 minutes about world history, the differences between 'cool hats' and baseball caps and then bode us farewell and disappeared into the night.   I'm thinking he bolted to be with the celebrity inner circle in the penthouse floor.
David Faustino is a stand up guy, why else would he take his picture with me and the Darkslayer. He even swapped me the photo for a copy of my book. He was the one I actually wanted to meet being such a big 'Married with Children' fan and all. Pretty awesome Grand Master B! 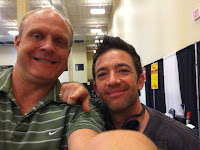 Paris Themmen (Mike TeeVee) was nice to talk too as well. He set me up with a picture and a golden ticket for my son. He excepted a copy of my book and said he actually might read it.

Dafnee Duplaix (starred recently in One Life to Live) was impressive to meet and kind enough to talk with me and take a few pictures. She's been in alot of television shows and commercials over the years and she told me wanted to stay on TV and hopefully she will.  With all the cable channels and shows out there it shouldn't be a problem for her.

It was pretty sweet talking to some these celebrities over the weekend, making the trip plenty memorable. I put links on there names if you wish to know more about them.  I'll talk more about the artists I met in the next blog that were really cool too.
Posted by Craig