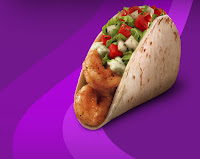 You know, there probably isn't anything on the TACO BELL menu that I actually do not like.  Currently the .89 cent chicken burrito is my favorite.  The Cheesy Gordita Crunch and Mexican Pizza's  are tough to beat too, but it's a budget breaker.  The truth is, if they mixed up my order, but I had the same amount of food, I could careless.  I think I would still be happy.  So last week I was enthused to try the Pacific Shrimp Taco because I like seafood in general as well.  I figured it wasn't going to blow me away, but i didn't think it would disappoint me either.  Well, it disappointed.  Meager shrimp and a sloppy look.  Now, I am not about to abandon Taco Bell after one bad idea.  But no more seafood there for me.  It think it cost's $2.79 but I wouldn't pay .15  cents. If you want seafood go anywhere else preferably near a beach.
Posted by Craig